Home » News » The two sides of the housing crisis 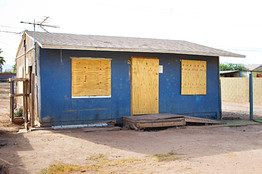 The more that I read about the housing crisis, it seems that it has two very clear sides.  First, are the sub-prime mortgages that were given to people like Marvene Halterman living in that little blue shack.  On the other side of the equation are people like Francine Hardaway, who despite being in a position to made a reasonable purchase were swayed (for some reason or another) into a purchase that they should not have made on terms which should have been avoided.  But, what do these two types of people have in common? More than either of them would want to admit on the surface …

They were both manipulated into taking loans that they could not repay.  In one case, it was a $103,000 mortgage for a shack that was recently condemned and sold for $18,000 in an auction to the neighbor who wants to tear it down.  In the other, it was a $769,000 home on a 5-year interest-only mortgage, that the owner freely admits she was going to try to refinance at the end of that period.  Both of these loans were foolish, the first one for the obvious reason that the shack was not worth that much money.  The second one was foolish because the owner did not have the income to make the payment (Francine is a self-employed entreupener that trains people on how to start businesses … I am not going to point out the irony in that) and was expecting to be able to refinance the house (because it would be worth more) at the end of the five years.  This was a gamble that the house would appreciate significantly, while she spent another $45,ooo modernizing the property.

But, these two situations are completely different because Marvene did not realise the situation that she was in and was consciencely manipulated by those who were providing the loans.  In fact, according to the WSJ, they as much money from the loans as she did.  On the other hand, Francine went into it with the experience of a business veteran and got burnt because something happened that she did not expect or predict.  I am sorry for both of them because they have lost their homes … but in both instances, they have treated their house as a source of money and not as home.