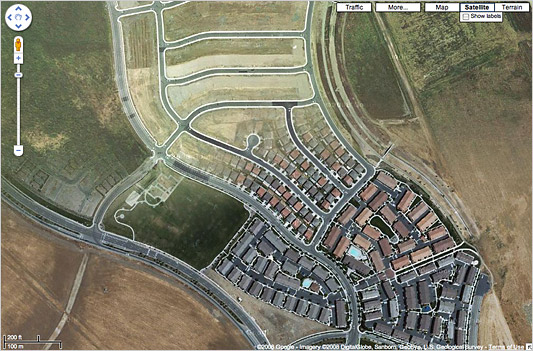 Lands cleared to make way for houses that were not (and may never be) developed. (DigitalGlobe, Sanborn, GeoEye, U.S. Geological Survey; 2008 Google Imagery)

Is the next version of white flight (or black flight – a more recent occurrence) going to be the middle-classes out of the suburbs?

This is not a new fad … it was covered last year in the March 2008 issue of The Atlantic … but the longer that the current economic crisis continues, the more pressing the question of the future of the thousands of (mainly recently) planned suburbs have. Just last week, the continued drop in house prices was noted … for example, in Phoenix, prices are down 50.8% off the peak in June 2006!  With this continued drop, what is going to happen to all of those houses?

For example, the article in The Atlantic raises a whole series of points about the questionable future that these communities have, ranging from the quality of the build to their relative attractiveness to a changing demographic.  While the McMansions are generally large, they are not huge (like a Victorian mansion).  Plus, they are generally built of low-quality materials and are not designed in a way that makes them easy to sub-divide.

Unfortunately, many of the solutions that have recently been used in urban areas or outside of the USA, are not applicable to a large portion of these homes and communities.  For example, a common fix here in the UK is the use of brown field sites for in-fill building that can raise the standards of a community and add needed resources (whether it be housing, shops, or schools). Most suburban ‘communities’ in the US are not designed to take much expansion or in-fill … they are completely planned from the beginning and therefore space for expansion does not naturally exist.  Just looking at the image above (of the incomplete ‘community’) and you can see how difficult it would be to add the amenities that would change it into a real community (stores, restaurants, bars, schools, etc …).

A common British solution of reclamation (see SalvoWEB) is not as useful when the materials and fixtures of a house are only of a superficially high quality! (I do have to make one note here … there are some successful organizations that do salvage in the USA – Architectural Salvage of Greensboro, Planet Reuse, or the Habitat ReStore – but they specialize in mainly older vintage materials or ‘new’ surplus materials.)

Luckily, it does look like the McMansion trend is slowing … so, fewer and fewer older homes are being razed and replaced by massive poor-quality homes.  I would much rather live in a 1920’s Craftsman than the vast majority of homes built in the last 20 years.  From many of the articles out there, it appears that I am not alone in that opinion!

One thought on “Rows of McMansions … Tomorrow’s Slum?”